Aeres student Gerdiene de Lijster is doing an internship in Kenya, for the Osotua Foundation.

My stay in Nkoilale in Kenya thus far has been challenging but full of good experiences. I have been here for one and a half week now. The first days, I really had to adapt to Kenya. It is so different from the Netherlands. The culture, the food, the house, the church, the temperature and even the toilet!

But I have met a lot of nice people, who wanted to make my stay in Nkoilale as comfortable as possible. Especially Damaris, who is becoming a good friend of mine. She is a student who lives in Nkoilale and helps me with translating, but also learns me how to cook sheep meat or how to wash clothes, the African way.

I already had some interesting meetings during my stay in Kenya. First I had a meeting with the NCDO, the community development organization of Nkoilale. I am impressed of all the things they have accomplished. Keep it going! The next meeting was with the NCDO and the WWF. I heard about some interesting plans to organize a cleaning up day for the whole community, to clean Nkoilale. Another plan was to prevent erosion by slowing down the water that runs downward from the slopes and through the river.

I had another short meeting with the SNV and the NCDO. They told me about a grazing plan they made for a conservancy. Because of a shortage of grass, the cows are starving. There are multiple causes, for example shortage of rain and growing amounts of cattle. A fattening program was started to produce beef and reduce the number of cattle. Besides that the land was divided in 13 blocks for a grazing plan. But there is also a lot of wildlife grazing in the conservancy, which makes it difficult to calculate the amount of grass that’s needed. These are all things that are important to the grazing plan I am making for three ranches in the neighbourhood of Nkoilale.

I interviewed one of the oldest man of Nkoilale, and he told me that the way of grazing when he was young, had a lot of similarities with the grazing plans I am making. I was delighted to hear about that. I made already some maps of the area but for someone that isn’t a Maasai, it can be challenging to understand their culture and their way of keeping cattle, and to decide what’s the best plan. So I will keep on getting more information about Maasai, their cattle and their grazing areas. But it’s very interesting to get to know these people and their way of living in this beautiful region of Kenya! 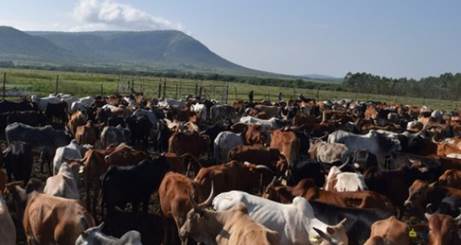