The protein transition: not a fad, but a trend

People need all sorts of nutrients to stay healthy, including proteins. In Europe we often obtain these proteins from dairy products, meat and fish: all of them animal products. As the world's population grows and prosperity increases, the demand for proteins grows with it. If we want to prevent scarcity, and for sustainability reasons, we will need to use fewer animal proteins in the future – and more vegetable proteins. In addition to vegetable proteins, there are new options for innovation to be found in insect farming, aquaponics (plant-fish systems) and soil-based feed production. Researcher and project manager Michiel Klaassen, of the Circular Economics research group at Aeres University of Applied Sciences Dronten, is optimistic about the opportunities, possibilities and developments of the protein transition.

It's one of the main reasons why he is doing his PhD research in Wageningen University's plant breeding department, looking into identifying the natural genetic factors that influence the protein content of potatoes. Klaassen wants to know how to breed potatoes in a way that will enable the development of new varieties with a higher protein content.

As a scientist and researcher, Klaassen – who studied Plant Sciences at Wageningen University – firmly believes that there is still a great deal of progress that can be made in this field. In addition to his PhD research, he is a researcher and project manager at Aeres University of Applied Sciences Dronten with a focus on waste flow value creation, renewable raw materials and the circular economy. He provides support to companies and organisations in creating value from renewable raw materials like proteins, fibres and minerals from waste streams.

Walking through the supermarket, Michiel Klaassen notices that the range of vegetarian products is increasing. It makes him optimistic: "A few years back, there were still only a limited number of alternatives to animal products in the supermarket, but the range of all sorts of vegetarian burgers and other meat alternatives is growing fast. You can also see that there's a realisation that we need to change, and that change can also grow very fast." But that's not enough on its own, the researcher says. Klaassen believes that we don't just need to change our consumption patterns, but also the way we produce food and make use of the available resources and raw materials.

Potatoes contain 1-2% protein. One hectare of potatoes currently yields a maximum of 1,500 kilos of protein. The food industry is showing greater demand for vegetable proteins, and there is call for potatoes with a higher protein content. For this reason, instructor and researcher Michiel Klaassen of Aeres University of Applied Sciences Dronten is conducting PhD research into the so-called 'protein potato' in Wageningen University & Research's plant breeding department. Klaassen works with Avebe to carry out various field, factory and lab tests. The Avebe co-operative is active worldwide, supplying products based on potato starch and potato protein for use in products such as food, animal feed, paper, construction, textiles and adhesives. The development of a new 'protein potato' takes around 7 to 10 years.

An example makes a lot of things clear. Klaassen: "A large proportion of the feed we give our cows, pigs and chickens has to be imported. The demand for agricultural land in South America, for example, is enormous, and also the use of land, water, fertilisers and pesticides – and it's growing. Even if we eat that plant-based food ourselves – for example in a meat substitute – rather than feeding it to animals, that's a big step in itself. If we're able grow that plant-based food here ourselves, production in the chain will take another step towards sustainability. And obviously it would be really great to also be able to increase the protein content of, for example, potatoes." Klaassen hopes that his research will eventually be able to contribute to more sustainable production.

Michiel Klaassen sees the growing awareness and ongoing development reflected in the education offered at Aeres. Michiel: "Obviously we look at how we can integrate the results of the research into our students' teaching materials, and also whether we can combine the studies with professional practice." 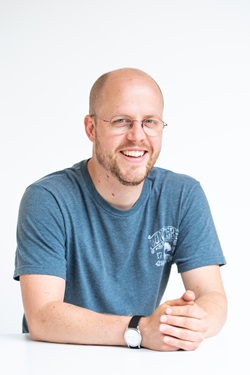 For example, Klaassen conducts his own research in collaboration with Avebe, which produces products based on potato starch and potato protein. This is in line with the way in which research programmes at Aeres University of Applied Sciences Dronten are implemented by lecturers, along with instructor-researchers, supporters, students from Aeres MBO and Aeres University of Applied Sciences and actual practice, within the research groups' lines of research. Themes like entrepreneurship, innovation, sustainability, ecological responsibility, and being environmentally conscious and socially responsible all play a role within each of these lines of research. During the past academic year Aeres has supported various initiatives involving the theme of protein transition, with Michiel Klaassen playing a co-ordinating role.

Michiel Klaassen hopes to complete his research in January 2020, and will then defend the results in his thesis. He already has ideas for further research. He hopes for just one thing: that the range of alternatives available in the supermarket will increase, along with the realisation that things must change – but even more importantly: that the current trend will be proved to be more than just a fad. And that will happen, if Michiel Klaassen has anything to do with it.